For upstream migration, Hydrostadium designs fish passes that enable migrating fish to bypass obstacles by attracting them to the area downstream of the fish pass and encouraging them to swim upstream.

There are three factors that determine whether a fish pass will function correctly :

Many different factors have to be taken into account when designing an upstream migration structure. Consequently, there are several fish-pass designs that are adapted to the type of structure to be bypassed (head drop, available space, etc.) and the target species and their size.

This type of fish pass is the most commonly used solution. The principle behind the pool-and-weir fish pass is to split the total height difference of the dam into a series of heads (generally 15 cm to 30 cm) in order to create a ‘hydraulic stairway’ that is compatible with the swimming ability of the fish and thereby allow them to travel upstream.

It therefore consists of a series of pools that starts at the foot of the obstacle and ends at the forebay. The partitions that separate the pools comprise overfalls, openings or vertical slits that control the water level of each pool and through which the water of the fish pass spills. The pools dissipate the energy of the head while providing rest areas for the fish.

Pre-barrages comprise several walls or sills that create, downstream of the obstacle, large pools that divide the fall to be crossed. On small water courses, they can be inserted without inconvenience across the entire length of the dam.

Pre-barrages are used for their attractiveness, as a high proportion of the river’s flow rate is likely to pass through the structure. Such attractiveness is generally to the detriment of the comfort of the fish: the head drops are, on the whole, greater than those of pool-and-weir fish passes (generally, from 0.3 m to 0.5 m) in order to reduce the number of pre-barrages.

In this type of fish pass, baffles, which serve to reduce the average speed of the river’s flow rate during upstream migration, are placed on the bottom of a straight channel with a relatively high gradient and a rectangular cross section.

Given the very turbulent nature of the flow, this type of fish pass is intended for large species.

This structure often requires a mixed solution for the upstream migration of fish and the crossing of canoe kayaks.

Natural passes comprise a fairly wide channel in which energy is dissipated and speed is reduced due to the roughness of the channel's bottom and walls and/or a succession of riprap which is spread quite regularly and thereby recreates, to a certain extent, a natural water course.

Unlike the other solutions, lifts provide mechanical assistance to enable fish to bypass the obstacle. They are installed on dams with little available space and/or a significant head drop (> 8 m - 10 m).

Eels do not have the same swimming ability or the ability to bypass structures as other species. While fish passes can be adapted to cater for adult eels (known as ‘multi-species’ passes), the creation of a specific installation based on the slithering ability of the species is generally preferred for young eels (elvers and small eels).

Consequently, specialist upstream migration solutions are designed in the form of a wet ramp fitted with a variable slithering support system. These support systems generally consist of a brush-based solution that comprises a carpet covered with bundles of bristles or concrete slabs covered with cones. 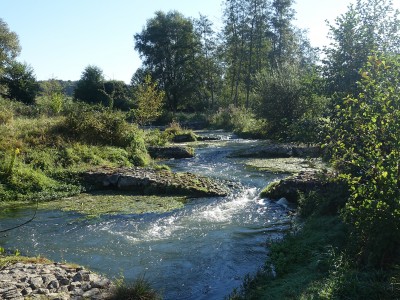 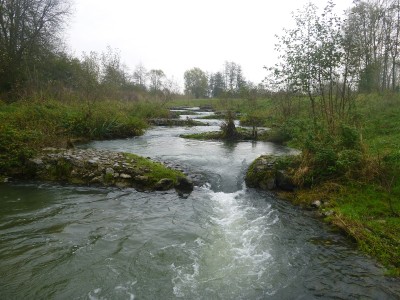 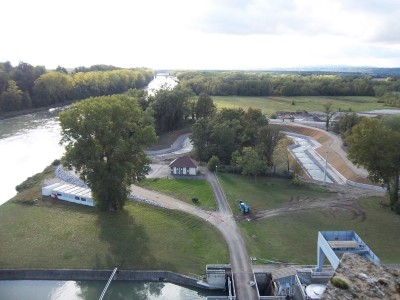